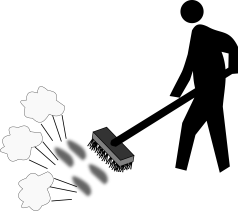 Almost two and a half million people are exposed to silica dust during the course of their daily work. Silica dust is found in concrete and stone. Any job that creates concrete or stone dust (drilling, sawing, crushing, etc…) releases that dust which can than be inhale. Most often engineering can control that dust, mostly through the use of water. Silica dust, however, is so harmful that controlling the dust simply isn’t enough. OSHA recently made some changes to the silica dust standard.

It also allows a new timeline for employers to comply with this new standard, especially the fracking industry which faces a daunting task in order to comply.

First-place winner of the Best Safety Video category in PR Daily’s 2013 Video Awards, the OSHA video “Deadly Dust” is a 9 minute video about the hazards of silica.

If you’ve got worker’s exposed to silica, this would be a great training video to get your workers to wear their respiratory protection.

We’ve talked and reported on OSHAs’ slow response to the combustible dust issue on this blog several times.
We’ve posted quite a few posts on the issue of combustible dust as well. (https://nationalsafety.wordpress.com/?s=combustible+dust)

We’d like to report that OSHA has finally started the ball rolling and will soon have a standard available but we can’t because they aren’t. What they have done, however, is to upload a new booklet onto their wesite entitled “Firefighting Precautions at Facilities with Combustible Dust”

The 30 page booklet explains why combustible dust is such a danger and how these facilities need special considerations and precautions, both before the fire, in order to prevent and well as once the fire has been started. It gives case studies of injuries and fatalities explaining how they could have been avoided.

One of the top safety issues this past year has been the issue of combustible dust. We’ve talked about it often in this blog including the explosion at Imperial Sugar as well as the CSB criticism of OSHA’s slow response to getting a standard in place (For a complete list of all the combustible dust articles covered on this blog go here).

So, having comes across a website that has a good series of articles on combustible dust as well as a white paper that you can request, I wanted to give you the link so that you could explore this issue better for yourself if it is relevant to you and your place of work.

The articles are a part of the Nilfisk website, a company that sells explosion proof vacuums (National Safety, Inc. is not affiliated with Nilfisk in any way and we are not a distributor for their products).

Besides the white paper entitled “Reduce the Risk: Understanding and Resolving Combustible Dust Issues” which you can request after giving them your information, there is also a Combustible Dust FAQs section that you will find informative.

Define combustible Dust (including the “Dust Explosion Pentagon”)
Is your company at risk?

An understanding of secondary explosions

This site isn’t the end all on the question of combustible dust but it’ll at least give you a firm grasp of the risk as well as some possible solutions.

The U. S. Chemical Safety Board (CSB) is apparently tired of OSHA dragging its feet on the combustible dust standard it promised to address as early as 2003 and has yet to act on.

In two separate statements, both of which can be found on the CSB website. Chairperson Rafael Moure-Eraso speaks out about OSHA’s failure to address the issue despite promises to do so.

Rafael Moure-Eraso is chairperson of the U.S. Chemical Safety Board.

The first statement dated on February 6th, addresses the lack of a standard that might have, had OSHA acted as it had said it would, have prevented the explosion at Imperial Sugar Refinery that that killed 14 workers and injured 38 others. This particular statement was issued on the four year anniversary of the explosion and chastises OSHA for failing to have followed through with a standard that they had promised was forthcoming as early as 2003.

The second statement dated February 19th, refers back to the 2003 dust explosions at the CTA Acoustics plant in Corbin that killed seven employees. Rafael Moure-Eraso claims that the findings related to that explosion resulted in a promise from OSHA to address the issue and draft a standard. It further builds on the accusation by relating other dust explosions that might have been prevented had a standard been in place. Each time, the CSB made recommendations to OSHA to draft a standard.

Apparently Rafael Moure-Eraso has had enough of OSHAs’ dragging its feet and is going public with his criticism of OSHA on this matter.

Part of his complaint has to do with the fact, not only that OSHA hasn’t yet drafted a standard but that apparently OSHA hasn’t even outlined a timeline, milestones or targets to get it done.

I, for one, am certainly interested in hearing what OSHAs response might be as to why it apparently hasn’t pulled out a manila folder and written “Dust Standard” on it. However overworked and understaffed they might be, this seems to be something that can’t sit on the back burner any longer. Without a standard to enforce, too many irresponsible companies out there will just continue to do business as usual and sit like a ticking timebomb.

According to a quick update that I posted last week about the Hoeganaes explosion, mention was made of a hydrogen leak being the cause of the problem. According to the CSB investigation, however, the hydrogen leak caused an explosion but the explosion ignited the combustible iron dust that has been at the core of the controversy surrounding this third accident.

The U.S. Chemical Safety Board states that clean up alone is not enough to avoid future explosions. The whole manufacturing process has to be redesigned and reengineered to keep the dust from just accumulating all over again.

The CSB has no power to close the plant or to impose sanctions; its role is limited to giving recommendations.

Should Hoeganaes ignore these recommendations, however, one can only guess about the possible repercussions. It is bad enough that 4 people have already died because of combustible dust without risking further lives.

To complicate matters, combustible dust rulings still hang in the balance with OSHA as well as on local levels (TOSHA in this case). Until OSHA puts it down on paper I’m afraid, many companies will not comply with simple recommendations.

When we purchased and moved into the building that we presently own, it was being used as a woodworking shop where high end office furniture was built. In spite of the fact that the previous tenants used vacuums to suck up the saw dust we found dust everywhere. Even now, years later, we find that dust still accumulates for where it leaks in areas we didn’t access or clean out properly.

Wood dust can seem fairly harmless. It is, after all, natural. Wood dust however can cause a number of health related issues such as asthma, chronic bronchitis and other respiratory problems. The sawdust from certain types of wood has even been found to be toxic.

In addition to the health issues are the other safety issues. The most obvious one, is of course, the fire issue. Saw dust is wood and wood burn. Additionally, saw dust can act as insulation trapping heat. This can cause the dust to combust and spread flames to all other areas where saw dust is present. A fine “mist” of sawdust can lead to an explosion.

Saw dust can also create slippery floors, especially when some type of liquid is added to the mix.

Some dos and don’ts relating to cleaning up wood dust:

It never ceases to amaze me that the same people who will make sure that everyone knows that they will not sacrifice their health for their employer (and rightly so) often aren’t quite so hard on the boss when the boss is themselves. In their own workshop, the very safety measures that they are so adamant about at work go out the window at home.

Be smart, be healthy, be safe!

You are not allowed to enter a confined space without wearing a gas monitor because of the potential dangers associated with combustible gases, CO2 and/or oxygen deprivation. MSHA is now proposing a new rule that would require workers in certain areas of the mines to wear continuous personal dust monitors in order to help awareness of when and where dangers and health concerns exits.

The rule would, at the same time, lower the dust PEL (permissible exposure limit) to ensure that workers’ health isn’t being affected long-term.

At issue is “black lung disease”, blanket term that encompasses emphysema, silicosis, pneumoconiosis (CWP) and chronic bronchitis, all of which are a result of long-term exposure to coal dust. While significant strides have been made in reducing the number of workers who contract black lung disease, studies are starting to show an increase even in younger workers. Black lung disease is preventable and every effort should be made to eliminate it altogether.

Our need for coal and fossil fuels cannot and should not take priority over workers safety, especially if a few simple changes can make such a huge difference.

Be forewarned, however, it’s 539 pages so if you’re going to read it, get comfortable.

“The deadliest industrial dust explosion in the United States in decades” is what John Bresland, chairman of the Chemical Safety Board, called the dust explosion at Imperial Sugar.

The CSB has now released a 9.5 minute video entitled “Inferno: Dust Explosion at Imperial Sugar” which can be viewed or downloaded on their website (just click on the title of the video to go to the CSB website).

With reenactment and actual footage, the video takes you through the how and why of the explosion, trying to figure out what we can learn from this horrible accident to make sure that similar accidents are not repeated. It is important information, especially relevant for dust that isn’t normally considered hazardous which nonetheless becomes explosive when turned into fine dust that can be ignited.

Check out the video and research further information on combustible dust on the CSB website.