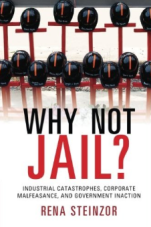 Rena Steinzor is a professor at the University of Maryland Law School and she has just published a book entitled Why Not Jail?  Industrial Catastrophes, Corporate Malfeasance, and Government Inaction. In her book she takes OSHA to task for failing to do their job when it comes to prosecuting repeat and willful offenders when these offenders are responsible for the loss of lives.

Steinzor claims that OSHA only refers a very small number of cases for prosecution to the Justice Department.

One of the most obvious examples, she states is the death of four workers at the Dupont Chemical plant in TX.

Professor Steinzor argues that OSHA, in fact, helps big corporations avoid prosecution by labeling their disregard for safety as “Serious” rather than “willful”. “Willful” would allow the justice department to prosecute the companies with criminal recklessness. Labeling a violation as “serious” means that the company is immunized from criminal recklessness charges.

OSHA’s response to her book, so far, has been to ignore it altogether.

When OSHA chief David Michaels was asked directly about the book his only response was to say that it was “simply wrong”. When asked what parts were wrong he responded “Many parts of it”. When asked for further clarification he refused to continue the discussion and asked that  they simply “move on”.

When a company is unwilling to spend what is needed to protect their workers, not because they can’t afford it but because they are more interested in profit than in the lives of those who make that money for them, these companies should be subject to criminal charges.